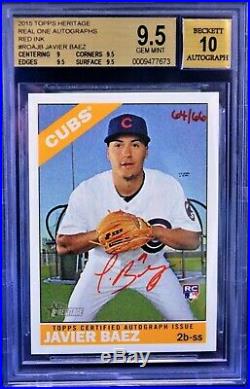 I will be happy to answer any questions you may have. For sale is one of the true grails of Javier “El Mago” Baez collecting. These numbered Real One Red Ink RC Autos are REALLY difficult to find even raw, as I’m almost certain they were all redemptions in 2015 Heritage, so odds are that not nearly all of them were ever released into hobby circulation. They are even more difficult to find in gem graded condition. According to the BGS Population Report as of the date of original listing, this is one of only six (6) examples of this card that have been graded an overall 9.5 to date (and there are no overall 10s). Last I checked, the PSA Population Report for this card was even more sparse in terms of gems. NOTE : Baez signed both the numbered and unnumbered versions of these Heritage Real One Autos in red ink. Usually, the unnumbered Heritage Real One Autos are in blue ink, and the numbered ones are in red ink. Instead, Javy used red ink for all of them. Sometimes the unnumbered ones get counted as “red inks” in pop reports (and get labeled as such by sellers who are either unscrupulous or unknowledgable). I know this type of categorizing mixup happened with at least one of the PSA 10s, as I used to own one of those that was an unnumbered example, but it was undeniably included in the PSA 10 Pop count, which at that time stood at a grand old total of 3. The “true red inks” are the ones numbered to /66, like this one, and they are incredibly difficult to obtain, especially gem graded. That extreme scarcity helps explain the asking price. I have a numbered PSA 10 version to keep in my PC, so I’m willing to let this one go if someone is willing to really pay up for it. I know a lot of people who are interested in this card, and I’m sure there are many more out there who I don’t personally know. Just to be straight with everyone up front: I’m not going to give anyone a sweetheart/friendly deal on this. For the sweetheart/friendly deal price, it stays in my collection. Also, please don’t message me asking how low I will go on it. In fact, don’t do that for any of the cards I have listed. If you make an offer that passes through the auto-decline, then (and only then) we will have a serious conversation about price. I’m not suggesting this is your one and only opportunity ever, but there just aren’t more than a handful of these even combining the PSA and BGS populations, and given how few numbered ones seem to be in circulation in the first place, and given how so many of these cards (both numbered and unnumbered) had pretty pronounced centering, surface, edge, and/or corner issues as issued by Topps, there just aren’t likely to be ton more gem graded examples added in the future. On that point, I think it’s telling that since this one was graded by BGS in 2016, before the WS win, there have only been two more added to the 9.5 population. And this is almost certainly always going to be one of the very most coveted Baez cards. Please check out my other auctions, which include numerous other scarce young Cubs cards. Sorry, but have been burned a few too many times by folks who never paid. The item “2015 Topps Heritage Real One Red Ink AUTO SSP #64/66 Javier Baez RC (BGS 9.5/10)” is in sale since Thursday, February 20, 2020. This item is in the category “Sports Mem, Cards & Fan Shop\Sports Trading Cards\Baseball Cards”. The seller is “the_jellyfish7_gemquarium” and is located in Ankeny, Iowa. This item can be shipped to United States, United Kingdom, Denmark, Romania, Slovakia, Bulgaria, Czech republic, Finland, Hungary, Latvia, Lithuania, Malta, Estonia, Australia, Greece, Portugal, Cyprus, Slovenia, Japan, China, Sweden, South Korea, Indonesia, South africa, Thailand, Belgium, France, Hong Kong, Ireland, Netherlands, Poland, Spain, Italy, Germany, Austria, Bahamas, Israel, Mexico, New Zealand, Singapore, Switzerland, Norway, Saudi arabia, United arab emirates, Qatar, Kuwait, Bahrain, Croatia, Malaysia, Brazil, Chile, Colombia, Panama, Jamaica, Barbados, Bangladesh, Bermuda, Brunei darussalam, Bolivia, Ecuador, Egypt, French guiana, Guernsey, Gibraltar, Guadeloupe, Iceland, Jersey, Jordan, Cambodia, Cayman islands, Liechtenstein, Sri lanka, Luxembourg, Monaco, Macao, Martinique, Maldives, Nicaragua, Oman, Peru, Pakistan, Paraguay, Reunion, Viet nam, Uruguay.